Translate here to your language, please. 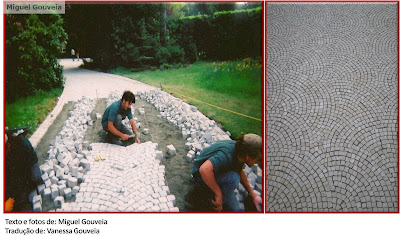 The paving art dates back to the dawn of world history. Since the ancient civilizations that rock materials have been used to pave the interior and exterior of the buildings. We believe this art had its origins in Mesopotamia, and then been exported to Classic Greece and Rome. The durability, resistance, regular surface and ease to hygiene maintenance as well as the aesthetic beauty, laid to this kind of rocky materials the construction preference, in different historical times. The Romans were the civilization who left behind the greatest legacy to the world in art, when using it as a human expression, philosophic, religious and aesthetic.

It was made on the sidewalk, mostly in roads that connected the empire. It was also the sidewalk brightens the interiors of the palaces and houses, with magnificent tiles. Later, the Arabs also left us an enormous legacy in the art of paving. The first indications of constructed roads date back to 4000 BC who were mostly stone paved streets at Ur in modern-day Iraq and timber roads preserved in a swamp in Glastonbury, England.

The road builders of the late 1800´s depended solely on stone, gravel and sand for new century constructions. Water would be used as a binder to give some unity to the road surface.

In our days is the cement that blind all the structure of the pavement stoned.

In Portugal, the sidewalk suffering a major boost after the Renaissance and especially with the reconstruction of Lisbon after the earthquake of 1755´s.


The Portuguese cobblestone is a traditional form of treatment in urban space, taking genuine aesthetic value, certainly is regarded as a true manifestation of national culture. This traditional form of artistic covering of walkway remains a key element of our urban landscape, with a growing demand in recent decades, both in public and in private buildings.